The Chengdu Research Base of Giant Panda Breeding facility is a fantastic place that has great success in breeding pandas – 7 have been born in the last 3 months alone.  They also loan Giant Pandas to facilities around the world to help with the re-population of this magnificent animal, including a male/female pair to Zoo Atlanta (that has resulted in 3 successful births).  The park is set in over 1000 hectares with plenty of room to replicate the natural habitat.  As someone who is generally against animals in captivity, I was pleasantly surprised at how well this environment is built and maintained.  There are huge areas for each Panda and Panda family and we arrived early enough in the morning to see plenty of activity – they feed and actively play in the mornings when it is cooler.  After doing some research, this is also the best time of year visit.

The main driveway up to the Panda area 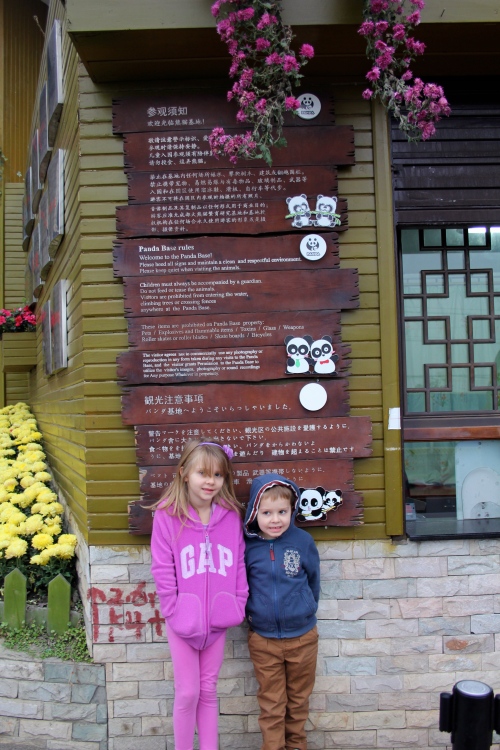 So excited for the day – lots and lots of Panda Bears to see! 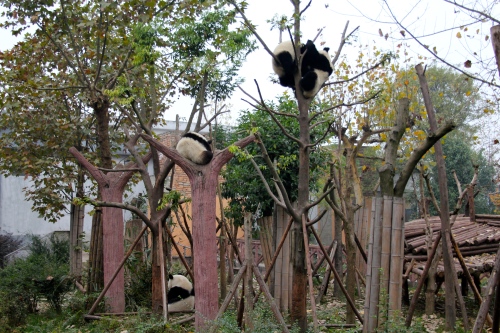 Pandas playing in the trees

The Research Facility is huge and there are electric “trains” that take you to different areas of the park. It is a very natural looking environment to help with the re-introduction into the wild.

One of the pandas- Mei Lan, had special significance for us as we had seen her as a baby panda in Zoo Atlanta when she was the result of a successful breeding in 2006.  There are fewer than 1000 Panda’s in the world, so the breeding successes in Chengdu are critical to the Panda’s survival.  They simulate as natural environment as possible as the goal is to release them back into the wild.

We walked around some of the areas and took some fabulous photos – they are such lovable animals.  As well as giant pandas, this facility is also home to the Red Panda which actually looks more like a raccoon. 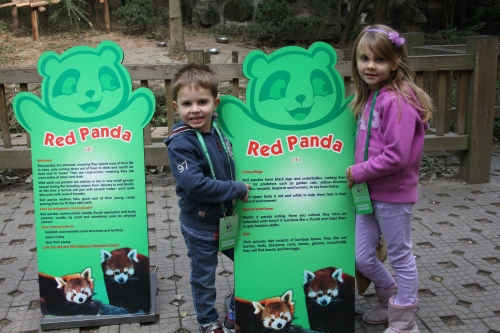 By the Red Panda area

Our first visit was on Sunday morning and we strolled around the different areas, took many photos and oohed and ahhed at the babies in the nursery!

Very cute baby Panda Bears in the nursery. These 2 were born in September. (Another 3 were born in August – we saw these in a separate nursery).

Unfortunately, the “Panda Experience” was not open so we made the decision to return the following day.  As well as Giant Panda’s we also saw many Red Pandas playing – all of the animals were very active! 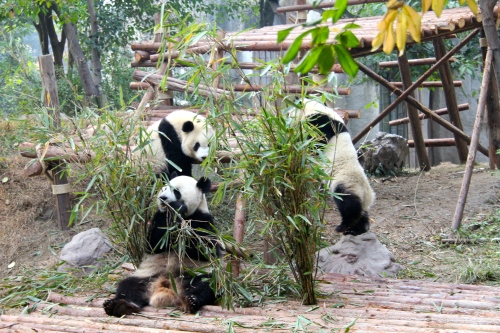 A lot of information about the Panda is given. It is so nice to read their story, learn where they get their names from and get a better understanding about these fantastic animals.

On Monday morning we went back to the Chengdu Panda Base for the “Panda experience”.  We arrived at the Sunshine nursery at 9:30 to be told to come back at 10:00 with a donation of 1300RMB per person to have an interaction experience – truly a once in a lifetime event.

After we had paid, we watched a video of the Panda life cycle from birth to fully grown, saw pictures of Pandas from birth to adulthood and got an education on their diet (no meat for these bears) and then we were escorted into a back room. We were given blue surgical coveralls to put on, plastic covers for our shoes and plastic gloves.  We gave our camera to the lady in charge and then they brought out the most gorgeous panda. Her name was Zhen Zhen,  and she is 1 year old, weighing 100lbs.  They had attched an apple to the end of a bamboo stick and she happily followed along to the bench.  She was helped up and then was fed some apple slices and given some bamboo sticks dipped in honey.  It is true that bears like honey – Winnie the Pooh shared that secret many years ago!!

Owen was the first one to sit next to her. He could not keep the smile off his face – and the same was true for all of us who followed!  Oliver was a little apprehensive and did not want to sit as close as Owen had done, but quite happily stroked her and smiled for photos.  Isabelle was next and she loved her, scooching up close for a cuddle with feet curled up on the bench.  It was not long enough for Isabelle who had to move to make way for me.  I could not believe that I was sitting next to this marvellous gentle creature whose fur was so soft.  Throughout all this interaction, Zhen Zhen was happily munching her way through sticks of bamboo and oblivious to all the attention.  We finished off by having some family photos taken as a fabulous reminder of a truly wonderful experience and well worth the money, in my opinion.

Kissy, kissy! And a scratch behind the ears……

Oliver was not too sure to start with.

But he had cuddles too!

Isabelle absolutely loved her cuddle “She is so soft, Mummy!”

I don’t think she could get any closer!

My turn at last!

I am speechless. I cannot believe that I am actually cuddling a Panda Bear.

We will never forget this experience

The rumours are that they will be stopping this after next year so we are grateful to have had the opportunity to get so close to one of natures most beloved animals and such a recognisable mascot for China.