The Great Wall at Mutianyu, 长城/万里长城

After a good night sleep in the hotel, we were up early to to do the hour’s ride to the Great Wall (ChongQing in Chinese).  It was a fairly easy drive, and only the last 20 minutes were busy.  Lots of mini-buses, coaches and vans taking crowds of tourists to this popular part of the Wall.  We were lucky with the weather as the smog levels were relatively low and it was not raining!  Jeff went off to buy our tickets for the ride up/ride down part of the day.  He told us that Michelle Obama and her 2 children had been there within the previous 2 weeks which now made this part of the Great Wall even more popular.  The American public will be pleased to know that their taxes paid for this busy attraction to be completely closed for their visit!  There were street vendors all over the place selling souvenirs, fruit and vegetables.

The busy street vendors. We bought some dried pineapple here – best ever!

The plan was to take a chair lift up to the Great Wall and then do the toboggan ride back down after. 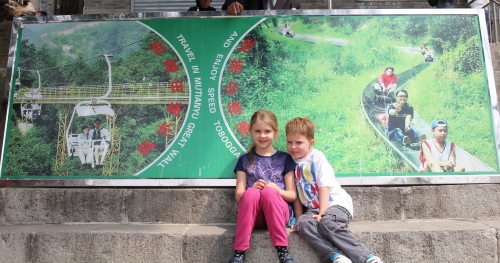 Isabelle & Oliver by the entrance to the Chair Lift ride.

The Great Wall at Mutianyu

Ashley & Oliver riding up on the Chair Lift. 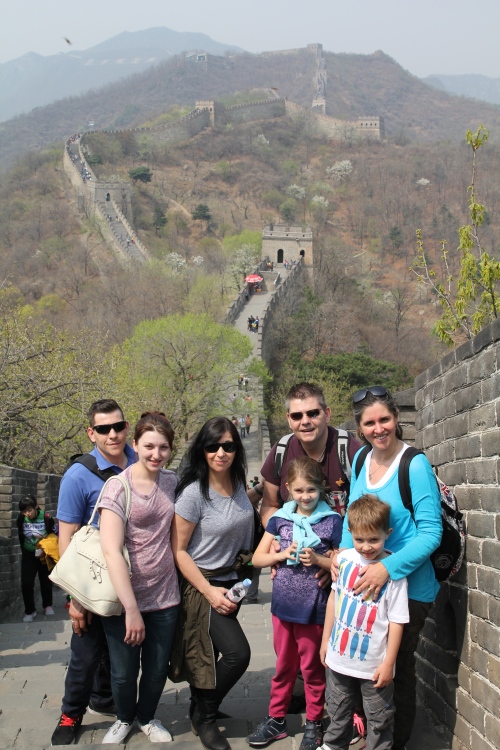 Another one checked off my Bucket List! Oliver took this photo of me on the wonky steps on the Great Wall. 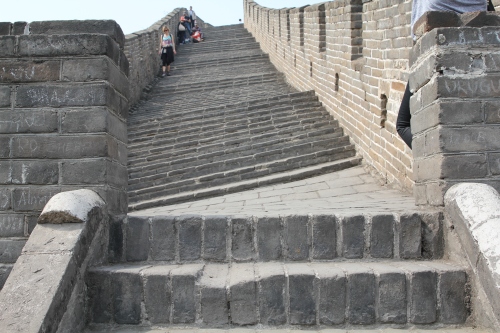 And, here is how the wonky steps look from the bottom…..

This was an amazing experience.  I did not imagine that I would make it to the Great Wall.  It just shows that if you put items on your Bucket List to achieve (even if you think they are wild and out there, hopes and dreams) you can complete them.  Now, if I can just find a way to complete 77 – take off and land on an aircraft carrier in the ocean…….

We spent several hours walking parts of the wall and listening to Jeff give us some history and facts.  The architecture is quite spectacular.  All the more because it has survived for thousands of years, is so extensive and has some quite brilliant engineering.  For example, archeological surveys have determined that the Wall is over 8,850km (5,500 miles) long; it was started 800BC but was mostly built during the Ming Dynasty (1368 – 1644); there are approximately 25,000 watch towers; it has been estimated that up to a million people died building the Wall over the period of time of construction.

Fire was used to signal to other watch towers, so when the guards/soldiers wanted to eat or stay warm, they had to light fires in chimneys like this one. It would have been incredibly smokey in here as there is no outlet for the smoke!

The Great Wall has holes like this to line up bow and arrows to fire at approaching enemies.

There are cannons at intervals – pointing at the North (Mongolia) ready to fire!  Oliver is in the line of fire here!!

We were lucky with the weather. It was actually a warm sunny day. Smog was relatively low – even so, you can see the haze. 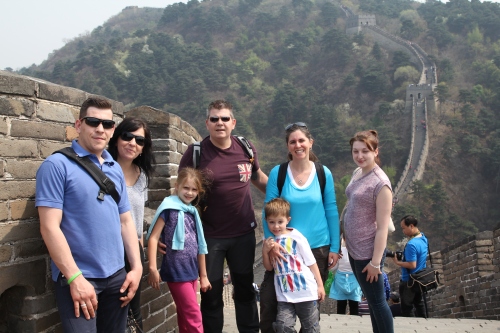 All of us with another view….. 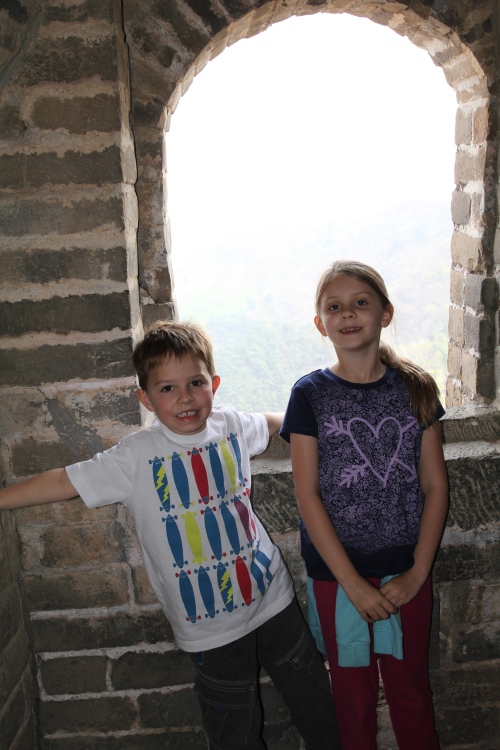 Oliver & Isabelle by one of the windows in a watch tower. 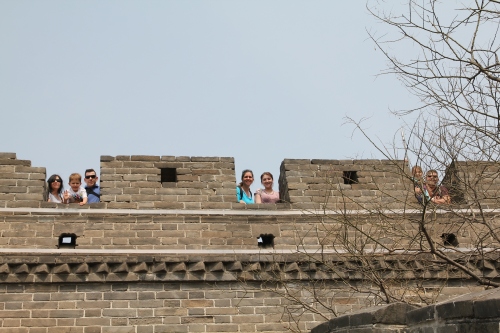 Jeff took a photo of all of us at the top of a Watch Tower.

I was quite surprised at how many steps there were.  When I thought of the Great Wall, I had imagined it quite smooth on the top.  It is definitely a work out to see this marvelous piece of engineering and building.  After all the exercise walking along, we were ready for a thrill ride back down to the village.

We had to wait in line for about 45 minutes as this is a popular way to return to base!  But, it was definitely worth the wait…….

Kim and Sara ready in our toboggans.

Harley and Isabelle riding down.

Once we were all safely at the bottom, it was time for a very late lunch.  Jeff took us to another great local restaurant and we stuffed our faces with more delicious local food.  Our original plan had been to see the Summer Palace after this, but we had spent so much time on the Great Wall, that we ran out of time.  So, Jeff took us to the train station so that we could continue on with the next leg of our journey.  On to the sleeper train for 1 more night, this time traveling to Xi’an.

This entry was posted in Uncategorized and tagged "This is China", Beijing, Catherine Lu Tours, Kids, Mutianyu, Owen, The Great Wall, travel, vacation. Bookmark the permalink.