Another long weekend, this time due to Dragon Boat Festival and we had booked a long weekend to Guilin.  On Friday afternoon we picked the kids up a little early from school and then set off for the airport.   In true China fashion, we had a delay, but it was only 30 minutes.  We landed in Guilin at 7.15 and a driver from the hotel we had booked (the Sheraton) met us ready to take us to hotel.  We had a late dinner in the cafe and then settled in for the night.

The Sheraton is a nice hotel on the river and there is spectacular scenery all around this beautiful city.  On Saturday morning our guide, Lily met us to start our days adventures.  Just like our guides in Beijing and Xi’an, Lily was knowledgeable, flexible and attentive.  She had arranged a nice minivan for our transportation and we had a good driver to go with that!  We started the morning by visiting Fubo Hill which is a large local park set around a large rock hill. 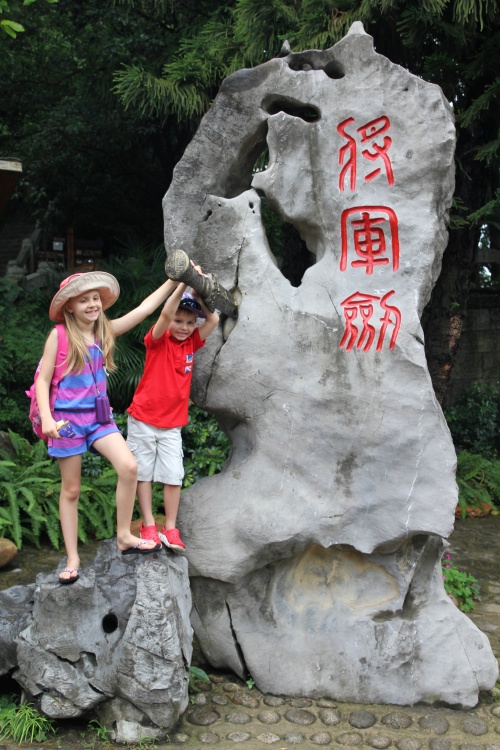 Isabelle and Oliver trying to pull the sword out!

Oliver (and Army General) by the entrance to Fubo Hill Park. 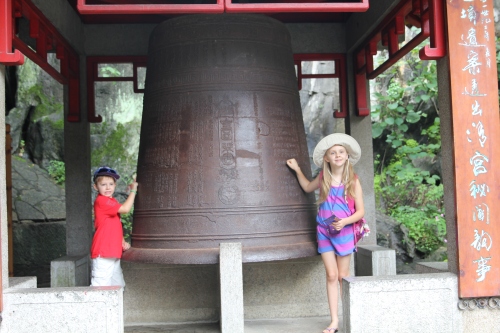 Oliver & Isabelle by the “Huge Bell” 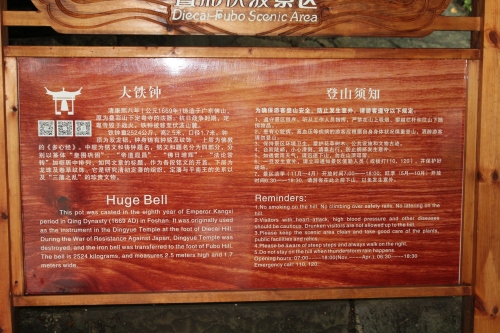 Owen, Kids and our guide, Lily by the Thousand Men Pot 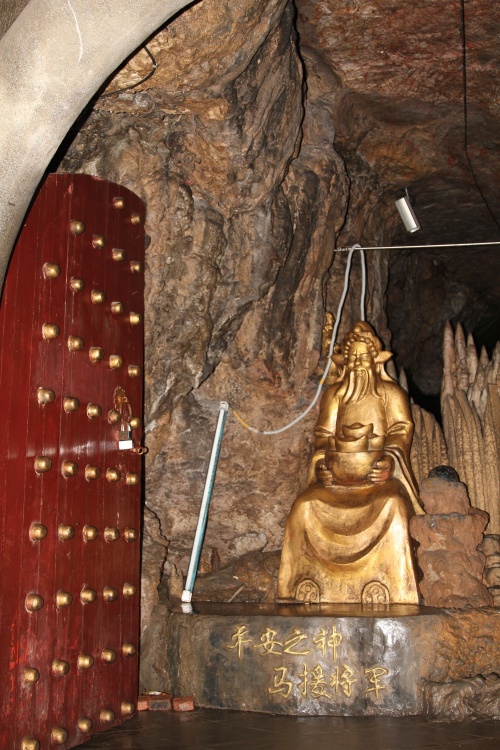 Inside of the huge stone hill are caves, with stone carvings, statues and walkways. 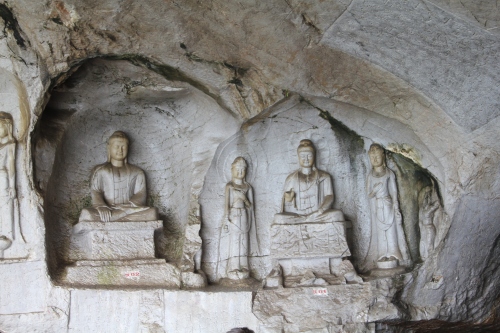 Some of the ancient stone carvings

Information about the stone carvings

Oliver by a Buddha

The back of Fubo Hill Park opens onto water. There are caves everywhere! 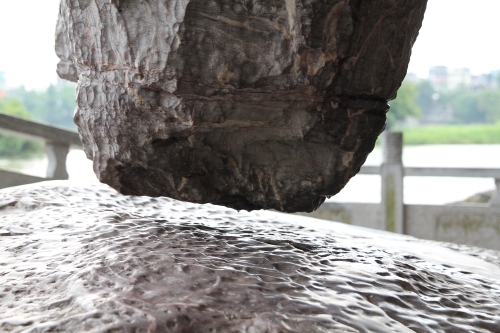 Details about the Sword Testing Stone and the Thousand Buddha Rock

After spending a few hours at Fubo Hill Park, we then set off for Reed Flute Cave, which is absolutely stunning.

The cave received its name in the Tang Dynasty (618-907) for the numerous reeds growing outside the cave.  Back then, the local children liked to carve the reeds into flutes and even today, children can be seen around the cave’s entrance offering to sell the reed flutes that they make to visitors.  What makes Reed Flute Cave so marvelous are the stalactites, stalagmites, and columns that can be found inside the cave and the very creative and effective lighting for tourists.  The formations were created over thousands of years by dripping water.  A very small amount of calcium carbonate located in the water adheres to the stone with each drop.  When the drop hits the floor of the cave it also leaves a small calcium carbonate deposit that will eventually become a stalagmite.  These formations sometimes meet and become a column.  They grow on average of one millimeter per year.  The formations can be quite astounding and the ones found in Reed Flute Cave are particularly beautiful. 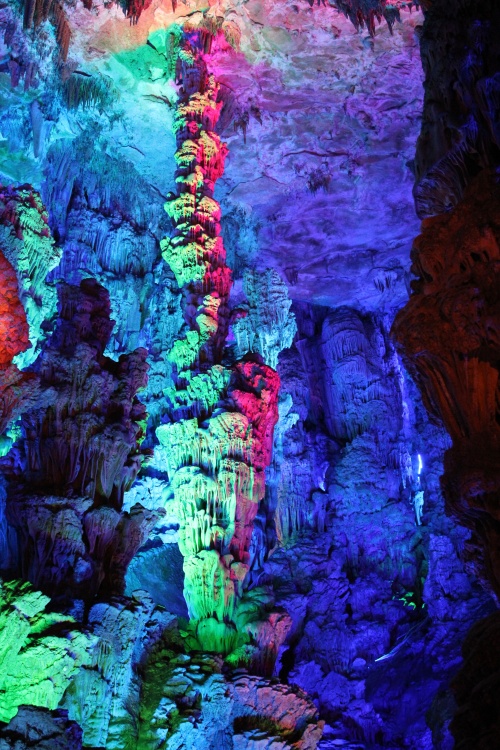 The beautiful lighting against the fabulous stalagmites and stalactites.

While walking through the cave, you can use your imagination to feel like you are being transported to different environments.  Some sections seem like a forest of crystal trees, while others seem like underground mountain ranges and even cities.  The strange formations can sometimes seem unworldly.  Many of the formations have taken on recognizable shapes of mythological creatures, or natural images.  There is one formation that even looks like Santa Claus with his sack on his back.  Due to the darkness of the cave, it is quite difficult to get a photograph that can express the same feeling as actually being there.

The kids loved the cave – it is huge and quite breathtaking. 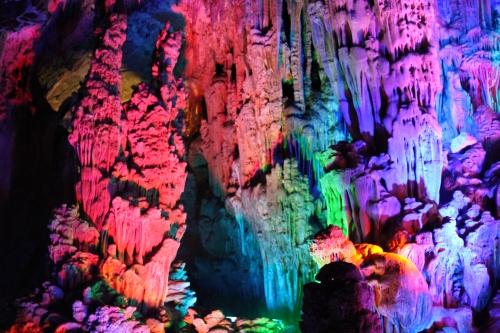 We spent ages looking at the different formations – everyone’s imagination interprets them in different ways.

The lighting really makes an impact when you are walking around.

The cave is over 240 meters in length and it takes visitors approximately one hour to walk through the entire cave. The cave’s route is U-shaped and the exit and entrance are very near each other. There are over 70 ancient stone inscriptions that can be found in the cave. They are travelogues and poems writing by Tang Dynasty literati who visited the cave and found it so beautiful that they wanted to leave their thoughts behind for future generations of visitors.  It is a magical place with so much to see.  Every 20 minutes there is a video projection in the main great cavern space.  It fast forwards through millions of years of history around the Cave and finishes with a ballet projection.  It is all beautifully done. 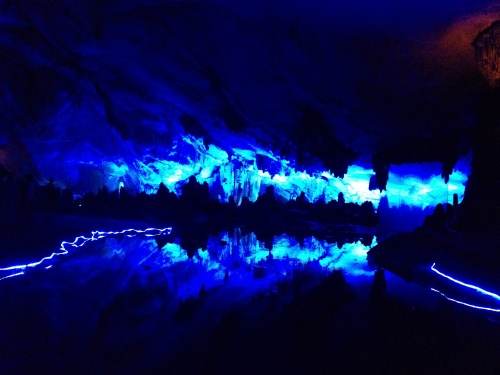 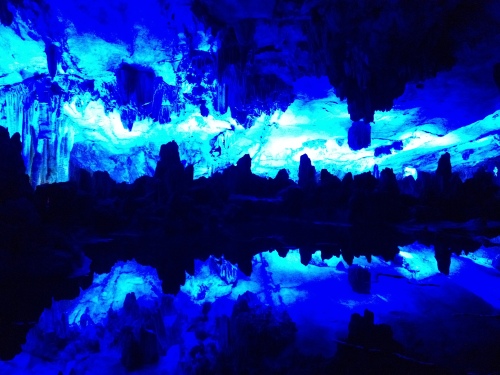 Outside the Reed Flute Cave, walking through the grounds by the river and lakes.

The view from the other side (outside Reed Flute Cave).

After the Reed Flute Cave we went on to Elephant Trunk Hill.  On the top of Elephant Trunk Hill sits a pagoda named Puxian Pagoda.  It is 14-meter-high, and was built during the Ming Dynasty (1368-1644).  The pagoda looks like the hilt of a sword sticking out of the back of the elephant.  There is a ancient legend that in times long ago, the Emperor of Heaven set out to conquer Earth commanding his troops from the back of the elephant.  The elephant worked so hard to provide transportation for the Emperor of Heaven, that it became seriously ill.  The local farmers nursed it back to health.  The elephant being extremely grateful, decided to desert the emperor and stay on earth to help the farmers plow their fields during a time of famine.  The Emperor of Heaven was so angry, that he thrust his sword into the elephant’s back and turned the elephant into the rocky hill.  The pagoda erected on top of the hill stands for the hilt of the sword.  Now this kindly elephant can forever stay with the friendly people of Guilin, guarding the city and welcoming guests from all over the world to this beautiful city. 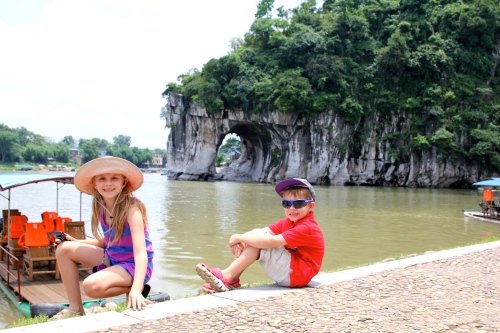 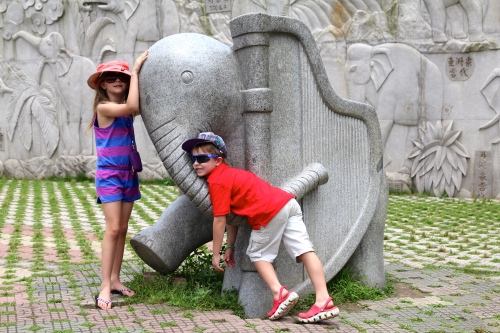 The cormorants who put on quite the fishing show!

Back to the hotel pool for swimming in the afternoon. It is the rainy season so we had to sit out for 20 mins but the kids were laughing about it.  We did dinner in the hotel (club lounge) as we were in a bit of a hurry to do the night river boat tour.  It was a beautiful evening to walk from our hotel to the local wharf where there were at least 8 boats waiting to take people out for an hour.  Lily had met us at the hotel to walk with us.  There was a motorbike show outside the front of our hotel with some Evil Knieval type stunts going on!!!

This boat trip was quite the treat as all along the way there were entertainers for us: musicians, dancers, actors and actresses.  All the trees were beautifully lit along the whole journey which took about 1 hour. 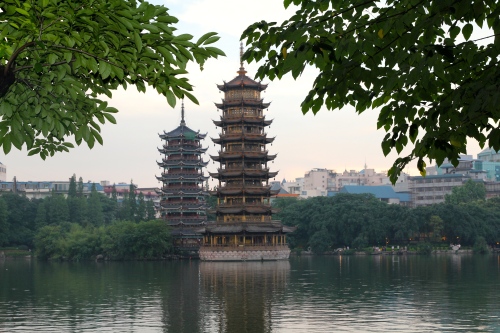 The late afternoon view of the sun and moon pagodas. The Sun and Moon Twin Pagodas is situated in Shanhu (Shan Lake). The word sun and moon in Chinese character written together mean brightness. Some say it symbolises the future of Guilin is bright.
The Sun Pagoda is constructed with copper, it has 9 floors and reaches a height of 41 metres. The Moon Pagoda’s is made of marble; it has 7 floors and measures 35 meters high. The two pagodas are connected via a tunnel at the bottom of the lake.

The Sun and Moon Pagoda’s just lit at the start of sunset. Our boat was just about to set off.

Beautiful scenery all around 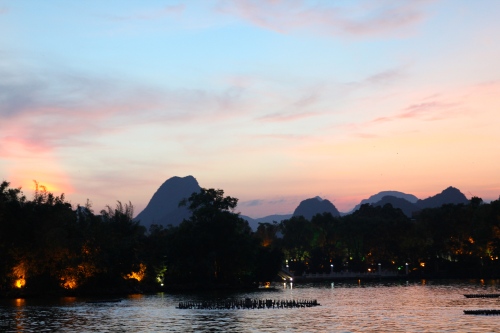 Another view from the boat. 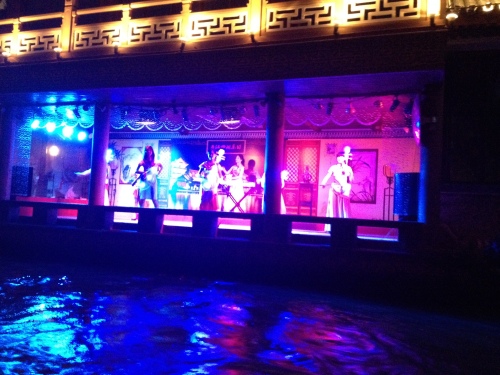 Entertainment along the river banks during our night boat ride. 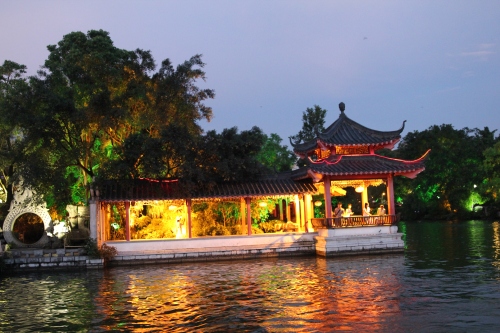 We passed under many bridges. Many are modeled after famous bridges around the world!

I really liked the detail of the Chinese scripture on this bridge. Look closely under the arch and you can see how much detail is there.

Beautifully lit trees along the embankment

One of the attractions here is the cormorant fishing show.  The birds dive down and catch the fish and then the fishermen massage the birds necks to get the fish out.  Isabelle and Oliver did not like this as they thought the birds were getting strangled!!

A cormorant about to dive down for a fish.

The fisherman massaging the neck to get the fish out. 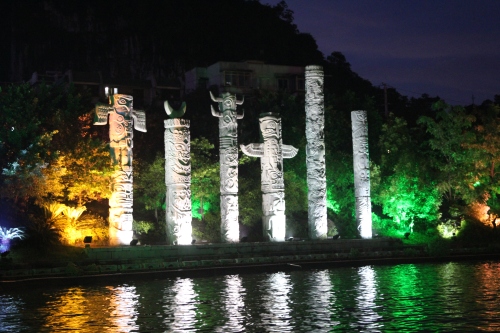 Artefacts along the river banks. 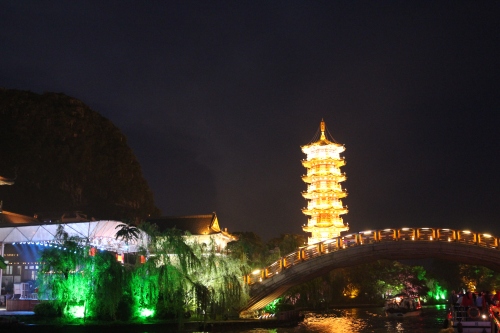 Managed to capture the moon in this one too!!

Detail of the pagoda

After the boat ride, it was a short walk back to the hotel but via the Waterfall hotel because at every day at 8.30pm for 10 minutes the hotel has a waterfall of water from their roof plus synchronised fountain display to music.  We stayed to watch and then headed back for a good night sleep after such a busy day!

The waterfall at the Waterfall Hotel.