On Saturday we went to a Chinese wedding.  Hui Zhi (a colleague at work) was getting married to Johnson.  As this was my first Chinese wedding, I was very excited to get an invitation.  The wedding started at 5:00pm and upon arrival, we were greeted like the guest of honour.  It was a beautiful, sunny day and the guests were milling around outside.  Meanwhile the bride and groom were having photos with all the guests.  First tradition we learned about!

We were given “tickets” for later, after the ceremony.  They had numbers written inside.  Isabelle’s was 520 written in red – this was a special ticket!!   The children both got given red envelopes.  When we got home, we were very surprised to see that they had money in for each child:

The lucky red ticket, flowers and red envelope.  520 sounds like “I love you” in Chinese and is often followed by 1314 which sounds like “forever”

We sat outside waiting for the ceremony to begin.  Hui was escorted by her father to the start of the red carpet and then Johnson took over to walk her up to the gazebo to exchange vows and rings.  The actual legal ceremony had already taken place and this was the celebration with friends, family and work colleagues.  Hui had chosen a more western style of wedding. Her first dress was a western traditional white wedding dress. 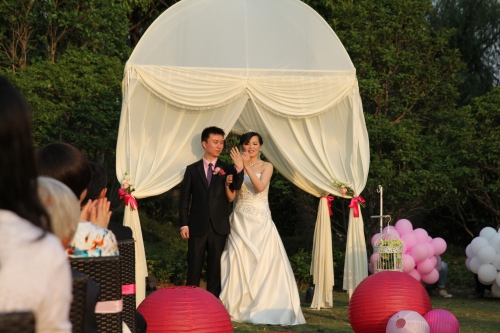 Showing off the rings.

The cage that is hanging on the right of the picture held the rings and the audience was asked to check their tickets to see who had the red 520.  Of course it was Isabelle!!  She had previously been selected to open the cage so that the rings could be exchanged!  As the whole ceremony is taking place in Chinese and no-one had said anything to me, I could not prep Isabelle for this, so she did not want to go up!  Another little girl eventually opened the cage for Hui and Johnson.  The white and pink balloons behind Hui and Johnson were released into the air after the exchange of rings and vows.  To our great surprise, the General Manager where I work gave the speech toasting the happy couple.  Work is such an important part of the culture here and great importance is placed on the attendance of Senior Managers at events like this.  I had this speech simultaneously translated by another work colleague.  He gave a great speech, placing emphasis on the importance of the Groom always listening and paying attention to his wife!!  I guess some things are Universal……. 🙂

After the sunshine ceremony, it was inside for the lengthy feast and games.  On the way in, we all signed the guest book.  Each of the tables also had a movie theme, so we discovered that we would be sitting on the “Love Actually” table.

Signing the book. Owen and I were amazed that Isabelle signed with her Chinese name (accurate characters) and then added the Pin Yin – Bei La, underneath (bottom right).  Oliver attempted his Chinese name in Characters and then got carried away!!

The table assignments – Love Actually for us!

The wedding dinner was a traditional Chinese dinner with many courses – the food kept coming and coming.  Poor Owen was struggling to use his chopsticks with his hand still in a cast, but he refused to use silverware!

Our table – sitting with several work colleagues.  (Notice the cigarettes!!)

We both tried traditional Shanghainese wine.  It has a very rich, yeasty taste that is a little like Port.

As is the case with many Chinese dinners that I attend, I do not always know what I am eating.  I try almost everything and have been pleasantly surprised many times when I do this.  I don’t really want to know what I am eating if I cannot recognize it!!!! We did, however, recognize Turtle when it was placed on the table.  Owen and I had seen these for sale in the supermarkets but this was the first time I had seen it prepared and presented.  This, I could not eat.  Neither could anyone else on our table.

Turtle. Cooked for so long that the shell is like jelly.

There were many delicious dishes to try and I was so proud of Isabelle and Oliver who were also very adventurous and tried lots of things.  There was a perfectly cooked huge lobster, dressed crab, salads, whole fish, fried rice, vegetables, pumpkin soup and a chicken broth.  Each place setting had a box with 2 ferrero rocher chocolates in.  The strangest thing on each table were 2 packets of cigarettes!  (A lot of smokers in China and you can still smoke almost everywhere.) 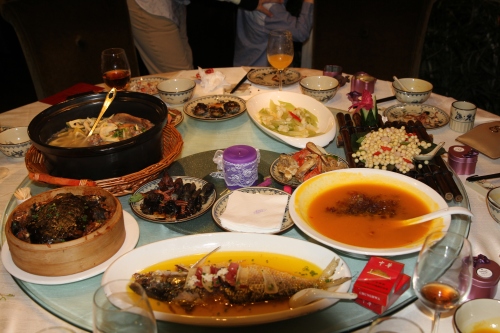 While the dinner was going on, there were many other activities, games and speeches taking place.  Hui and Johnson made the rounds to every table where they were toasted.  As I did not see them sit down, or eat anything, I am quite sure that they must have rolled out by the end of the evening!!  Lots of drinks and “Ganbei” going on.  If you are sitting at a large round table that has the glass lazy susan (most Chinese restaurants are set up in this way) then you do not have to stand and stretch across for each toast, you simply clink the glass table a couple of times instead.

The first game was for all the children.  It took a little bit of persuasion, but eventually Isabelle and Oliver went up on the stage.  I don’t know what was going on, but they came back with cuddly toys.  All the children at the wedding were clutching various lovies!!

Hui had a couple of dress changes.  Right after the outdoor ceremony, she changed into a beautiful blues dress:

2nd dress of the night.

Her last change was into a beautiful traditional Chinese wedding dress.  As red is a very lucky colour in China, brides always wear red at their weddings.  In fact, it is considered the height of rudeness for any guest to wear a red outfit at a wedding. 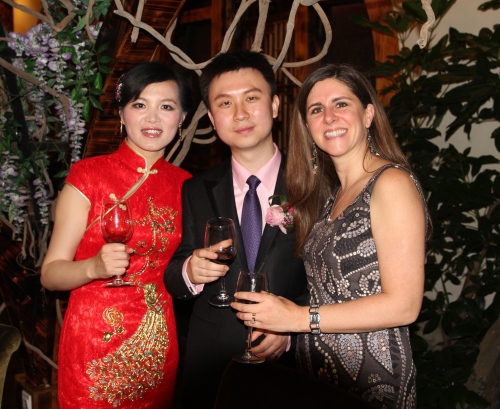 One of the games (selected by the ticket numbers!) was to go up on the stage and see how many lollipops you could squeeze into your mouth while still be able to say “Congratulations” (in Chinese).  Frank, a colleague from work who was sitting on our table, won this game by getting 7 lollipops in!!

Instead of throwing the brides bouquet of flowers to all the single ladies, the bride choses who is to receive her good wishes and flowers.  In this case, it was Monica – another colleague at work. 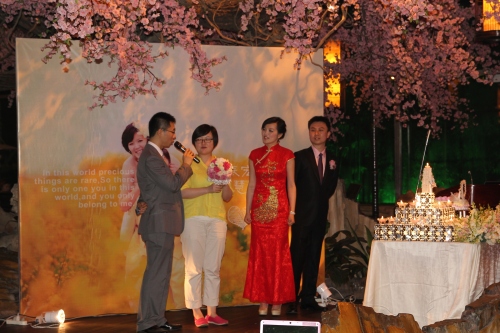 Most people were leaving right after the dinner – it was almost 9.00pm by this time anyway!  Isabelle and Oliver had enjoyed themselves – all Chinese people love children, and especially love western children!  They were both very good and were taking all the actions, activities, food and traditions in their stride.  It was a wonderful event and I hope that Hui and Johnson will be very happy together!