It is Sports Day season at BISS.  The school groups the competition days into groups and Tuesday May 7th was Isabelle’s sports day at BISS as part of the Year 3 and Year 4 grouping.  There are 4 Houses at BISS: Dragons, Monkeys, Panda’s and Tigers.  Siblings are always placed in the same house – Isabelle and Oliver are both Dragons who are represented by Red T-shirts.  There are many “House” events during the year and all the students take great pride in earning house points for their respective allegiance.  Both children also have the opportunity to earn points throughout the year for excelling in the school values and outstanding efforts.  This is a great motivator!!

The Athletic Field was set up with different stations that each team rotated through.  The parents walked around the outside of this area to cheer on their child.  They spent 5 minutes on each activity as a team to try to earn as many points as possible on each one.

The Dragons: Ava and Ethan are also Dragons!  Lined up ready to win as many House Points as possible.

Action shot over the hurdles.

Running and balancing the ball on the tennis racket.

Long jump – she had several go’s at this one and got better with each attempt.

Isabelle was very fast at this one. Plus her teacher, Mrs Scrymgeour, was running this activity so she worked extra hard at this one!! 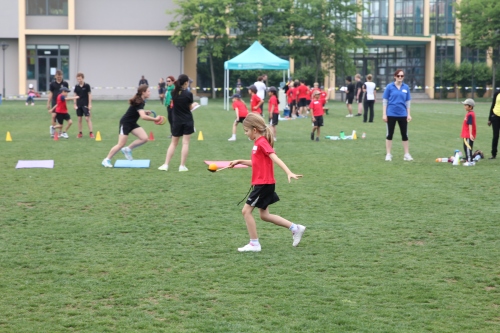 The event included many different activities: relay, balancing the ball on the tennis racket, hurdles, bean bag balance on heads, long jump, potato and spoon, balance bars, sack race, shot put, running and a water transfer race.  Isabelle said that she enjoyed the water race the most, but the rest station was her favourite part of Sports Day!!  All of the children were out playing competitively from 9:00 – 12:00 so it was a long morning of sports.  Monkeys came first for this year grouping, but the Dragons second place was only by 3 points!  (Not bad when you are in the 1000’s of points……) 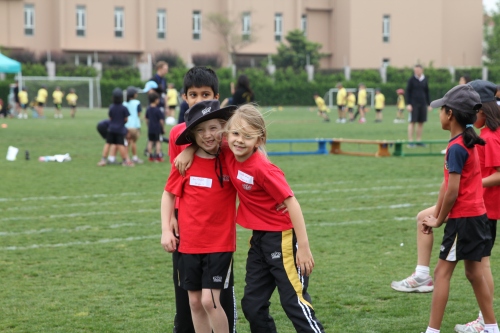 Cheering each other on.  “I am so happy to do Sports Day with my best friend”

Wednesday May 8th  was Nursery and Reception Sports Day.  This event was only for 1 hour as they do 2 minutes on each activity.  It is set up in the same way with different stations on the Athletic field that the parents walk around to cheer.  Oliver had 3 team mates in his class that are Dragons: Seren, Ben and Emma.  All of whom he really likes and plays well with.  This little team displayed fantastic team spirit throughout the entire event.  They were continually cheering each other on, helping with the transitions and generally wanting to win.  They all displayed huge competitive spirit, and the parents of these children were just as competitive as we were very loudly shouting and cheering for the Dragons!!

Hurdles (it was a little chilly to start off)  Very unseasonable for Shanghai!

The hurdles was one of Oliver’s favourites.  We were so proud of him because he very obviously put his heart and soul into every single event and tried his very best at each one.  He wears his heart on his sleeve and you could clearly see when he was happy with his performance and when he was disappointed in himself.  We were also very proud of his team spirit as he was so supportive and encouraging of his team mates.

Run along the balance bar and then jump into the hoop passing it over your head, then run very fast back!  This was another favourite of Oliver’s 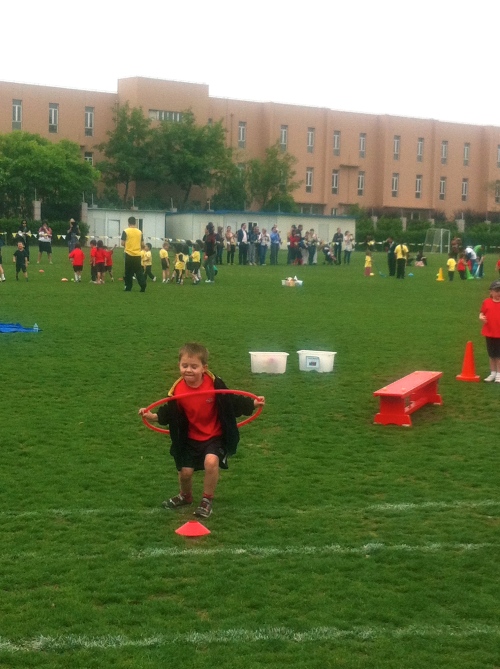 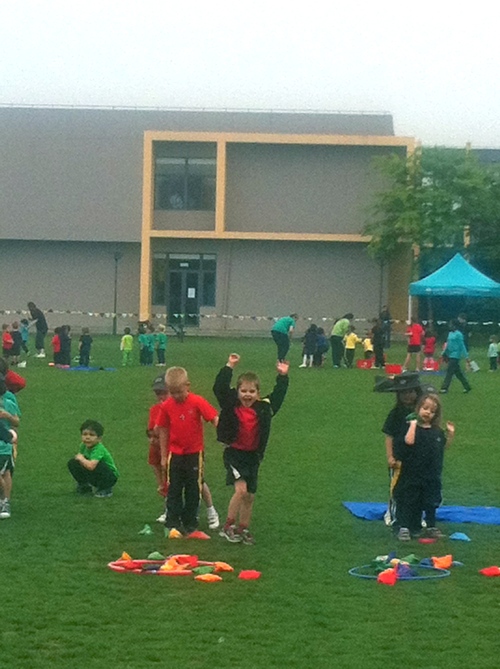 Throwing the bean bags in the hoop (point for each). Oliver is delighted with his efforts! 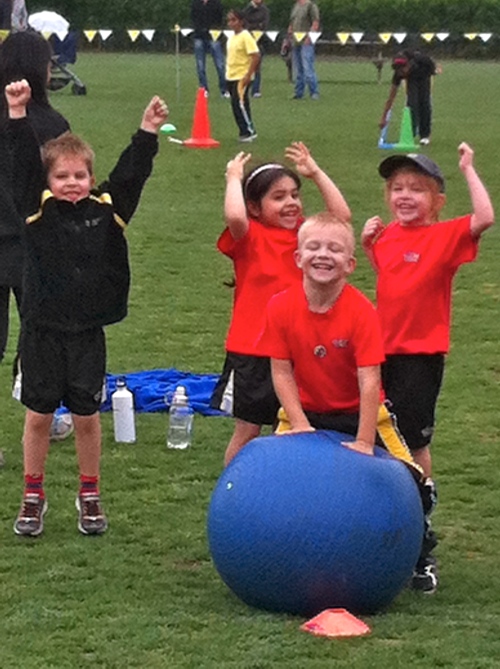 The Dragons team here have just found out that they won the last round which was bean bags in the hoop!

Balancing the ball on the tennis racket.

Oliver was very creative with this one as he discovered that it would go further if he kicked it rather than push it!

Balancing the hoop on his head.

Excellent result for Dragons today as the combined scores for the Dragons in Nursery and Reception meant that they had won the trophy.  Oliver, Ben, Seren and Emma were over the moon with excitement and delight!

Last Sunday, Isabelle competed in her first gymnastics competition.  She has only been doing it since January so this was a big deal.  She was in the second round of 7-8 year olds and so we had to be at school by 11.00 for the start of this.  Each group had 3 rounds of competition: the floor, the beam and the vault (horse).  Isabelle’s first routine was on the beam and she did a great job.  Apparently all the girls decided what they wanted to do so they were showcasing their best skills.

Then she moved onto the Vault.  She got to have 2 attempts at this.  This was her least favorite and her confidence was much lower on this one.  Her final round was on the floor.  She has been practicing hand stands for hours every day so I was very proud when she did an excellent one in her routine!

All the medals and cups!

It was a very professionally arranged event.  Isabelle attends Gymnastic classes every Monday after school as an ECA (Extra Curricular Activity).  The competition was against girls from all over Shanghai in her age group.  There were girls of all ages competing all day.  The cups were for 1st, 2nd and 3rd place. 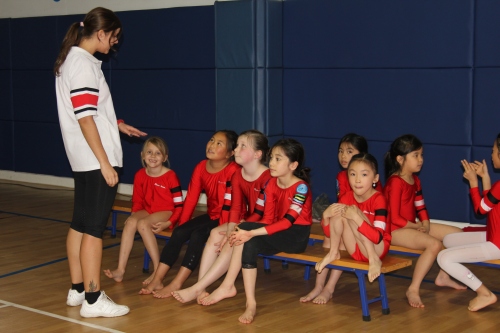 After the victory parade around the gym. 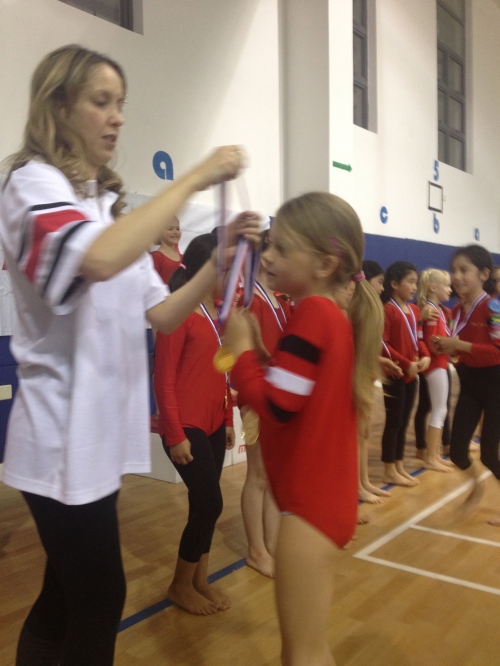 All the competitors received a medal for competing.  The organisers made a big deal out of stating that gymnastics is a solo sport and it takes courage to perform.  They were impressed with all the competitors who tried their very best.  I was delighted that Isabelle wanted to take part, as it was optional, and I was thrilled that she had the confidence to get out there and “just do it”!

Showing off her medal!