Today is a beautiful day in Shanghai.  The sky is blue and I have a fantastic view from my office window across the city.  The AQI is 63 (US Consulate) or 57 (China local monitory) – a “good” day.  AQI is a daily topic of conversation among ex-Pats and locals alike.  What is AQI?  It stands for Air Quality Index and it is the measurement that is used for the health of individuals breathing the air every day!

A breakdown of the classification of AQI

China has been in the International news quite a bit over the last few months and it is all because of the appalling smog that is blanketing this Country.

Many manmade and natural sources emit PM directly or emit other pollutants that react in the atmosphere to form PM. These solid and liquid particles come in a wide range of sizes.  Particles less than 10 micrometers in diameter (PM10) pose a health concern because they can be inhaled into and accumulate in the respiratory system.  Particles less than 2.5 micrometers in diameter (PM2.5) are referred to as “fine” particles and are believed to pose the greatest health risks.  Because of their small size (approximately 1/30th the average width of a human hair), fine particles can lodge deeply into the lungs.

Sources of fine particles include all types of combustion activities (motor vehicles, power plants, wood burning, etc.) and certain industrial processes. Particles with diameters between 2.5 and 10 micrometers are referred to as “coarse.”  Sources of coarse particles include crushing or grinding operations, and dust from paved or unpaved roads.  Other particles may be formed in the air from the chemical change of gases.  They are indirectly formed when gases from burning fuels react with sunlight and water vapor.  These can result from fuel combustion in motor vehicles, at power plants, and in other industrial processes.  Often these consist of fragments of unburned fuel and are small enough to reach the lungs or, in the smallest cases, to cross into the bloodstream as well.

The World Health Organization (WHO) sets a maximum safe limit of exposure over a 24-hour period: 25 of the PM 2.5 particles in every cubic metre of air.  Levels above 300 are considered hazardous, while the WHO recommends a daily level of no more than 20.

The Chinese government has launched an effort worth 1.7 trillion yuan (£180bn) to clean up power stations and traffic fumes.  Specific measures include closing down any power stations within the city that burn coal – or switching them to burning cleaner gas instead.

A new lottery system with very few winners is restricting the rise in the number of new cars and drivers.  Beijing already has five million cars on its roads, and greener cars will get priority.  Beyond that, a major push for renewable energy including hydroelectric, wind and solar is designed, in part, to help replace power generation by coal, the cheapest but most polluting fuel.

Hundreds of flights were recently delayed or cancelled in Shanghai as record levels of air pollution shrouded the city in smog, prompting authorities to issue the highest level of health warning.  That was especially embarrassing at a time when China seeks to build Shanghai into a global business hub on par with the likes of London, New York and Hong Kong by 2020.  (The Shanghai government issued its severest health warning as the city’s pollution index ranged between 23 times and 31 times the levels recommended by international health officials.)

On a recent flight into Shanghai’s PVG airport, I took these photos from the window.  You can clearly see the smog hovering above the city.

Clear blue sky above the smog. This should have been a fantastic view for me across the city.

What a pity that I cannot see much below me…..  Again, the line between clear blue sky and the smog can be seen. 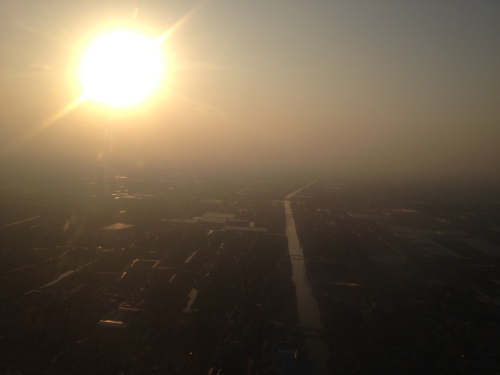 The smog is so bad that it “dims” the sun. 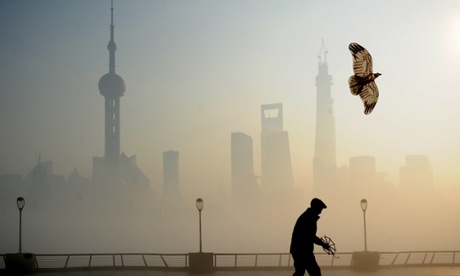 Look at this famous skyline from just across the river. Smog is low and thick. Many days seem to be like this in Shanghai now.

Last April a new health warning system was launched, and this year has been the first time that the Shanghai authorities urged residents to stay indoors and asked factories to either cut or halt production.

Air quality in cities is of increasing concern to China’s stability-obsessed leaders, who are anxious to limit potential unrest as more affluent citizens turn against a growth-at-all-costs economic model that has polluted much of the country’s air, water and soil.  The people are increasingly vocal…..  The government has announced many plans to fight pollution over the years but has made little apparent progress.

BISS cancels all outdoor activity when the AQI is too high.  It is amazing that both my children refer to “Green” days, “Orange” days or “Red” days and know exactly what the implications are.

Employers are also concerned for their employees.  Last week, my company sent this email out:

As is known to everybody, more mainland cities have been increasingly beset by thick, acrid smog, posing health risks towards our health and safety.  In order to care for each member of our community and reduce this risk, GFM plans to dispense free mask for every employee in our Office with details as below;

Criteria: only AQI exceeds 200 based on local formal forecast.

Dispensing Rule: one piece for each employee and registration is required in line with staff list.

The air quality is a major concern to Owen and I and we do not let the kids play outside when it is bad.  We have industrial grade air filters in each of our bedrooms and living space at home.  BISS has air filters in each of the classrooms, so the school does not have to close when the AQI is too high.  I believe that this is the biggest single problem for China at the moment.  However, London had a similar problem back in the 1940’s and 1950’s.  Once the Government there got serious about fixing it, it was fixed 🙂  There is hope for the Chinese…….