A Diamond Day out

Owen and I have fond memories of  a private charter boat tour in St Thomas (many years ago now and before kids!)  When we saw the reviews for a similar experience in Koh Samui, we knew we would have to try it again, but with the kids this time!

Our day started at 9.30 with a taxi pick up from our villa.  Oliver called this the BEST TAXI ever as it was a super large van with disco lights in the ceiling and captain chairs all round.  This was the start of our superb experience.  Scott welcomed us on the dock and walked us down to the “Diamond” Catamaran – a 32 foot luxury boat.  It had plenty of space for sitting, walking and lazing.  There was a dinghy on the back, plus paddle board and a really cool Blade Fish, which is a James Bond like gadget that you hold on to and it propels you wherever you want to go.  This was great for tired legs and VERY FUN.

Everyone on board and ready to go! Captain Bernie and Nojo are our hosts for the day. 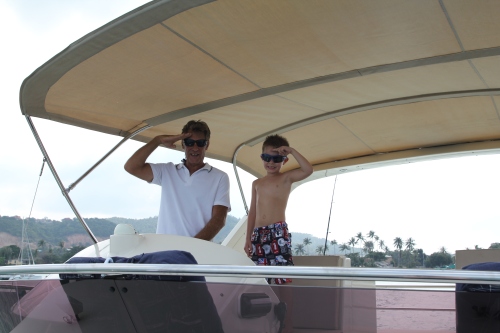 After a safety briefing, Scott left us in the capable hands of Captain Bernie and first mate Nojo.  These 2 made our day outstanding.  Captain Bernie immediately saw that I liked to take photos and he picked my camera up many times to take photos of us all because we were all too busy having fun or in the water!!  We left the dock and headed out across the ocean to another Thai island for snorkelling and messing about in the ocean.  This took about 45 minutes at top speed, during which both kids got to drive the boat, which they thought was the best thing! 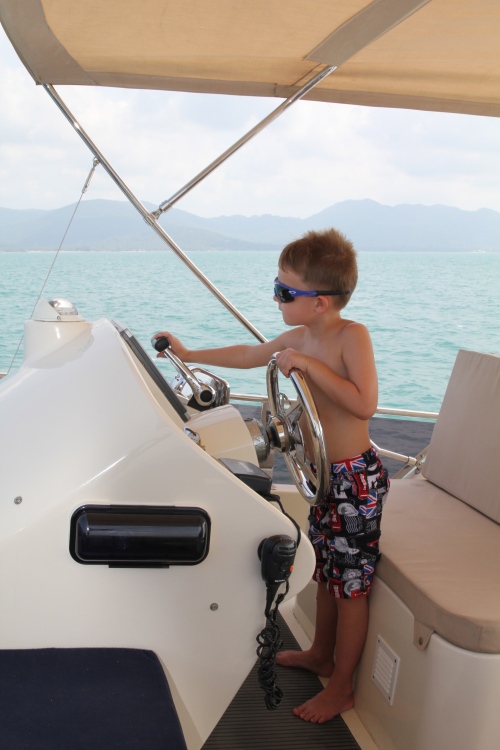 We are in good hands with these 2 at the wheel!! 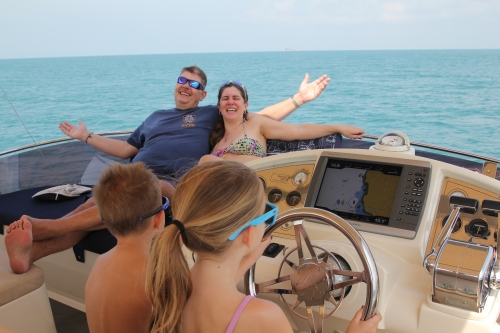 Nothing to do but relax and enjoy the kids being in charge, for once!

We all had lots of fun on the boat – Captain Bernie even managed to get photos of Owen and I messing around!!

“Shall I push him over board?”

Going…. going, but holding on! 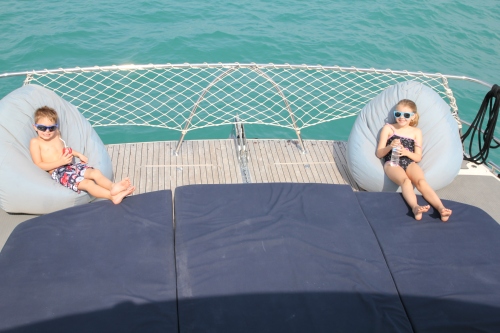 Kids relaxing on the bean bags at the front of the boat. These were soooo comfortable.

A lovely family shot. A very enjoyable day on this fabulous boat.

It was lovely to get photos of Owen and I too!

Once we arrived at the bay, it was time to drop anchor and play for a bit!  We all went snorkelling and this was the only disappointment of the day.  As this area had been billed as the best in Thailand my expectations were high, however the visibility was poor and I did not see much.  There had been some storms the previous week and this apparently had clouded the ocean.  The kids still had fun with the Blade Fish and just swimming around.  Nojo was excellent as he also got in the water to keep an extra sets of hands and eyes on our 2!  We all had a go on the paddle board – Oliver was the only one who managed to stand up long enough to go anywhere.  As soon as I stood up long enough to try to put the paddle in, I lost my footing and fell in – over and over again. 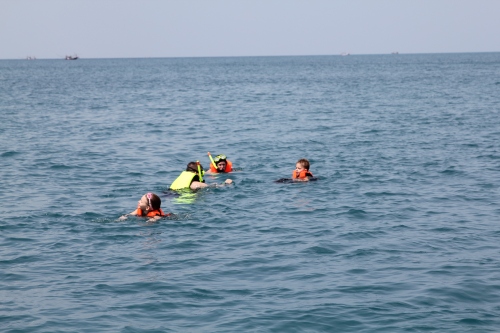 All 4 of us snorkeling.

Isabelle standing up on the Paddle Board. Did not last long!! 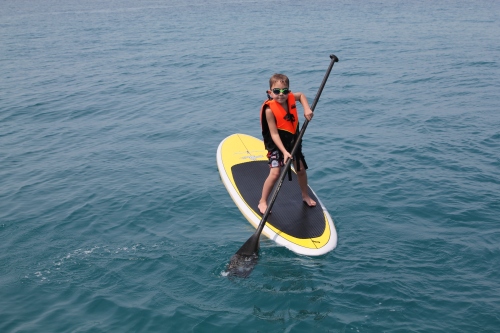 Oliver doing very well on the Paddle Board and even managing to paddle!!

At least this looks like Owen is a pro! Seconds after this, he fell off!!

So much fun for all of us in the Ocean! 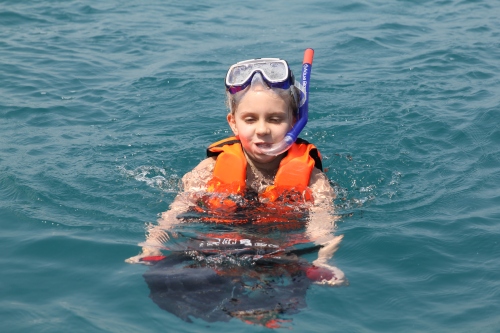 Isabelle trying out the Blade Fish. She loved this and thought it was the coolest way to get around in the water!

Isabelle and Oliver paddle boarding together!

Nojo got the Dinghy down and took us over to the sand bar that separated 2 islands.  This was really cool as you could see 2 separate currents meeting at this point.  The currents were quite strong and when I was snorkelling I did not realize how far I had drifted away.  It felt like a long swim back…….  I also felt tiny pin pricks on my arms and legs when I was in the water.  Captain Bernie said they were tiny (almost invisible) jellyfish, but Nojo (the local) said that it was actually plankton having a nibble!

Off to the Sandbar with Nojo navigating.

The sandbar where the 2 currents meet. This was taken from the boat in the bay, where we had dropped anchor and had been snorkeling, swimming and paddle boarding.

Nojo taking Isabelle and Oliver out……

Having a leisurely morning spent in this way, we returned back to the boat to find Captain Bernie serving lunch.  It was delicious – cold cuts, salad, fresh fruit – simple but so welcome after our morning activity.  There were plenty of drinks on board, Owen and I had a couple of glasses of Champagne too!

Ice cold Champagne to wash down a delicious meal. “Cheers”

After lunch, Captain Bernie gave the kids some bread to through to the fish and hundreds of them came up to eat!  Now, where were they when I was snorkeling!!

Isabelle and Oliver feeding the fish! 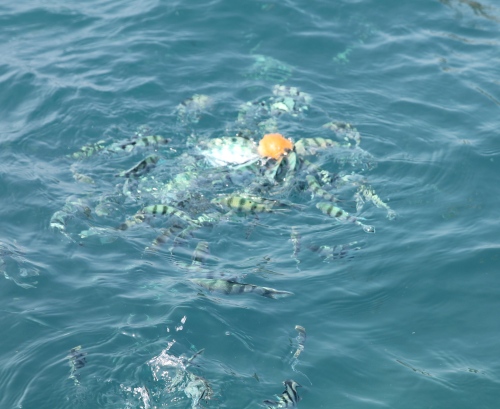 Captain Bernie was outstanding – nothing was too much trouble and he made sure that we did exactly what we wanted.  He was very entertaining (movie director before this career change!) and had some interesting stories to tell.  He was genuinely interested in us all and in ensuring that everyone was having a good time.  Nojo was brilliant too – very hands on with the kids and helping them on and off the boat (what felt like a thousand times!) and then holding the paddle board steady for them.  He let them both have a go at rowing the dinghy and was always smiling.

The boat was so luxurious with beds and bean bags on the front to laze on, a top deck where the Captain area was plus more sitting areas here, a well stocked galley and large dining area at the back.  There were snacks galore – cookies, sweets and fruit.  Isabelle and Oliver both helped themselves multiple times throughout the day!  They were particularly caring about our “no-nut” menu (for Oliver) and we could relax about that.

Isabelle and Oliver both fell asleep on the ride back to the dock – gently rocked by the boats motion and exhausted from so much water activity.  The squeals of delight from both of them during the day made it so much more special for me.

We even participated in a boat rescue on the way back to the dock!  We saw a stranded couple in a boat looking gloomily at a engine in pieces!  Captain Bernie threw them a rope and we towed them close enough to the nearest harbor for them to be able to get local help! 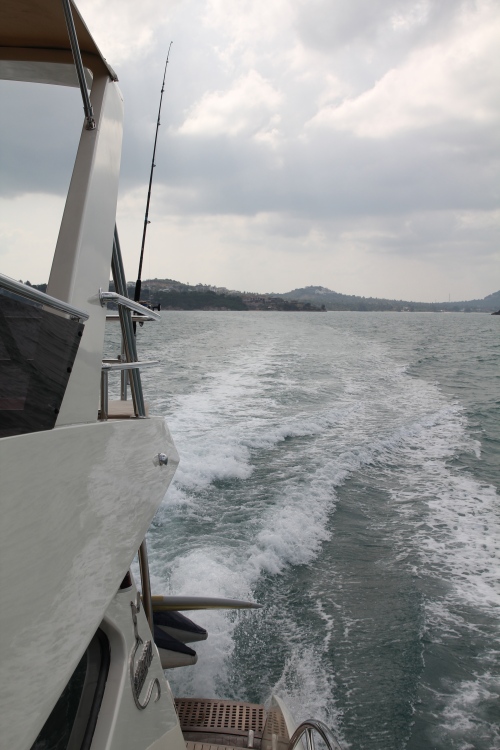 Watching the wake was so relaxing. Stress? What Stress? This is definitely the way to get rid of stress and totally relax! 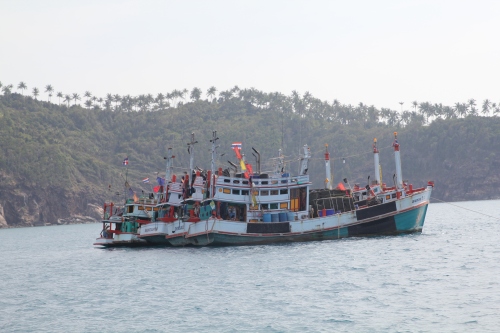 Colourful local Thai fishing boats. They drop 1 anchor (so as not to disturb the coral too much) and then tie themselves together. Trying to be green! I was appalled at the amount of trash on all the beaches that gets washed up. Both Captain Bernie and Nojo said that it was a cultural thing for the locals to throw stuff overboard, but there has been a lot of education to try to prevent it in the next generation.

The wonderful coastline on our way back. 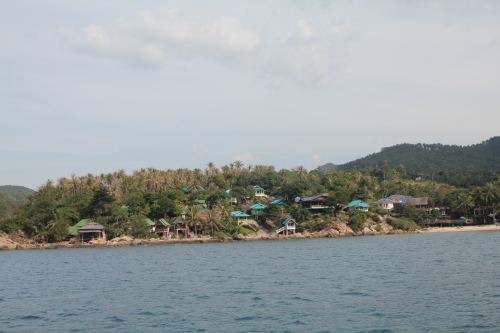 It is wonderful here.

We will all be talking about this day for some years to come as there were some seriously cool memories made yesterday by Scott and his excellent team.   We came home tired but elated. 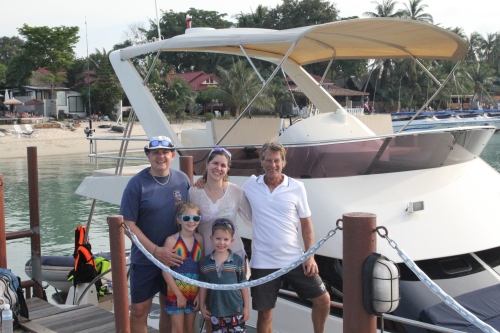 End of a wonderful day. Captain Bernie was a superstar!

We all had fun with Nojo.

One response to “A Diamond Day out”